It was a real pleasure to talk with the 50+ participants on the College of Policing, Strategic Demand Course at the Police College last Wednesday. It was the first time a section on police history had been included in this course. The course is for those working in the police service who have been identified as potential for promotion to senior roles, so a challenging group.

The picture shows (from left to right) Ruth Halkon from the Police Foundation, who Chaired our session; Paul Lawrence from the Open University; David Churchill from the University of Leeds; and me.

at December 10, 2022 No comments:
Email ThisBlogThis!Share to TwitterShare to FacebookShare to Pinterest

Despite massive loss of manpower from agriculture in Britain from around 1850 with mass migration into the towns and cities during the industrial revolution, by 1914 agriculture was still the largest single employer. During the last 2 years of the First World War (1917-1918) this made farm workers a prime target to conscript into the army under the first Military Service Act, 1916 [5 & 6 GEO. 5. CH. 104] and subsequent Military Service Acts.

Agriculture became nationalised from the beginning of the Lloyd George Premiership (December 1916) and developed policies to replace fit men of military age (18-41 years of age until mid-1918) by men outside these ages and less physically fit, and women. But in industries with strong trade unions such as engineering and munitions which feared industrial conscription and strike breaking, they fiercely contested replacement, setting up barriers to the deployment of workers from outside the industry.

However, agriculture was largely non-unionized, so fell mainly outside these hostilities allowing government to impose massive supplies of manpower into agriculture, first from the Home Army, to increase home food production, seen by agricultural workers as government-assisted blacklegs. The lack of unionisation in agriculture weakened farm workers’ ability to bargain for wage rises in this traditionally low wage industry, until the establishment of the Agricultural Wages Board in 1918. Until after March 1918 unskilled farm workers mainly received lower wages than substitute soldiers, who had their rates of pay determined by the War Office. Additionally, at a time when very few men wanted to go to war, many replacements on farms were exempted from army service at the front, while agricultural workers were still being combed out into the army.

But farmers, who employed agricultural workers, received government-guaranteed prices for their produce to encourage increased production, so were the main financial beneficiaries of government controlled agriculture.

However, no reports of strike action by farm workers was found, so that government had little opposition to deploying replacements, many of whom provided an inferior service to farmers compared with their experienced workers.

But policemen, also released into agriculture from March 1917 were welcomed by farmers due to their dormant agricultural skills from previous employment and their knowledge of the local area. Their role as first responders in a national emergency continues today.

at September 21, 2022 No comments:
Email ThisBlogThis!Share to TwitterShare to FacebookShare to Pinterest

Condemned to Repeat it: Why policing should take its own history seriously.

Delighted that The Police Foundation are holding an event on 13th May 2022 from 10.00-12.00 BST to promote the development and use of police history in research, writing and practice.

You can see further details including the speakers and register to join the discussion at Condemned to repeat it: Why policing should take its own history seriously Registration, Fri 13 May 2022 at 10:00 | Eventbrite

Hope you can make it. 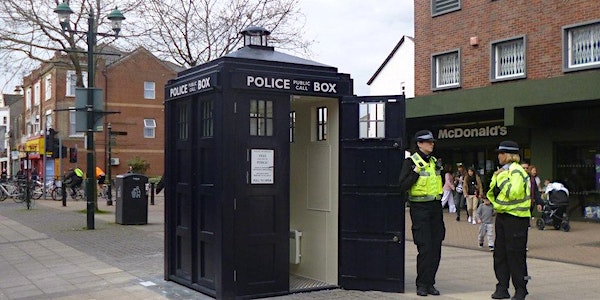 at May 05, 2022 No comments:
Email ThisBlogThis!Share to TwitterShare to FacebookShare to Pinterest

has been accepted for publication in the journal Cultural and Social History published by Taylor and Francis.

at August 10, 2021 No comments:
Email ThisBlogThis!Share to TwitterShare to FacebookShare to Pinterest

I was delighted to be asked to present a seminar in the British Agricultural History Society's Spring 2021 seminar series. It was part of the Society's Annual General Meeting. The seminar programme for the afternoon can be seen on https://www.youtube.com/watch?v=N4qq9ira0N4&t=437s which includes the abstract for the seminar.

It was a good afternoon

at April 22, 2021 No comments:
Email ThisBlogThis!Share to TwitterShare to FacebookShare to Pinterest

Britain’s police and food supply in World War One

I was delighted to be asked to give a talk to the Royal Philosophical Society of Glasgow on 21st October 2020. This is an ancient society in its 219th year with over 800 members. 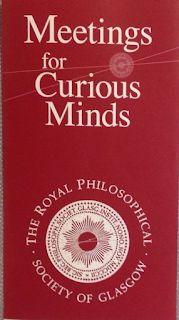 My talk was recorded and can be found on the Society's website, if you'd like to view it. It's an hour in length with around half an hour for questions at the end. You can watch it on the YouTube video https://www.youtube.com/watch?v=KS3YcBccIjo&feature=youtu.be

The talk develops further Chapter 6: Living costs (pages 106-121) in my book "Policing the Home Front, 1914-1918: the control of the British population at war", which is now available in paperback as well as hardback.

at November 05, 2020 No comments:
Email ThisBlogThis!Share to TwitterShare to FacebookShare to Pinterest

Policing the Home Front 1914-1918: the control of the British population at war

I'm delighted to say that my book "Policing the Home Front 1914-1918: the control of the British population at war" is now available in paperback. You can find the details at https://www.routledge.com/Policing-the-Home-Front-1914-1918-The-control-of-the-British-population/Fraser/p/book/9780367664411 It's also in hard back and as an e-book. Below shows the front cover 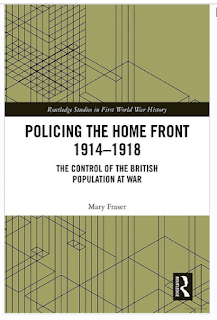 I hope you enjoy reading it.

at November 05, 2020 No comments:
Email ThisBlogThis!Share to TwitterShare to FacebookShare to Pinterest
Older Posts Home
Subscribe to: Posts (Atom)